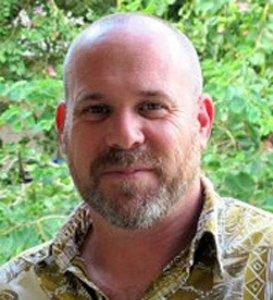 UCOWR is pleased to focus our spotlight on Dr. Darren Lerner, who was recently elected to our Board of Directors. He currently serves as both the Director of the University of Hawaiʻi Sea Grant College Program (Hawaiʻi Sea Grant) and the interim Director of the University of Hawaiʻi Water Resources Research Center (WRRC). Dr. Lerner received his bachelor’s degree in political science with a minor in psychology from the University of Missouri, Columbia. He then did some traveling, questioning what he wanted to do with a political science/psychology degree. He was always focused on the environment and enjoyed environmental related extracurricular activities such as hiking, biking, climbing, etc. He began to consider a future in science, working and volunteering in botany, biology, and zoology labs. Dr. Lerner earned his master’s degree in zoology from Oregon State University. His research focused on the physiology and endocrinology of snakes and other reptiles. It was there that he met his wife and after obtaining his degree became project leader for the USGS Fisheries Cooperative at Oregon State University managing various projects and conducting research on migratory fish such as salmon and lamprey. Specifically, he worked on developing tagging and monitoring protocols for the migration of juvenile lamprey (Columbia River), tagging and tracking migrating salmon, and avian predation on fish. Dr. Lerner then wrote and received funding for back-to-back grants funded by the Woods Hole Sea Grant College Program, which prompted him to pursue a doctorate degree in organismic and evolutionary biology from the University of Massachusetts, Amherst. He served as a research physiologist with the USGS Conte Anadromous Fish Research Center focusing on the impacts of contaminants on fish growth, development, and behavior of fish. Dr. Lerner served as a USDA postdoctoral fellow at the Hawaiʻi Institute of Marine Biology at the University of Hawaiʻi at Mānoa. He ventured to Hawaiʻi for a proposed two year endeavor and, 13 years later, Dr. Lerner, his wife, and two children continue to call Hawaiʻi home.

WRRC has been on the University of Hawaiʻi’s campus focused on issues in Hawaiʻi for over 50 years and has been receiving and managing USGS funds dedicated to water resource issues in American Samoa since 2013. It is a relatively small center, but employs very dedicated and focused faculty in research and outreach programs that support various facets of water resource research, with particular emphasis on groundwater issues, as this is the source of potable water for all of the Hawaiian islands. Dr. Lerner’s intent for the WRRC is to continue to build the Center through research excellence, increasing the number of faculty and the diversity of expertise, and focusing on formal outreach and education to disseminate the findings of the Center. His goal is for WRRC to be the locus for the people of Hawaiʻi and the Pacific Region for water resource data and information.